Post-traumatic stress disorder (PTSD) is a mental and behavioral health condition that affects individuals who have endured a disturbing, distressing, and shocking event. People living with PTSD often include combat veterans, victims of sexual assault, child abuse, and domestic violence, and survivors of other forms of trauma (e.g., natural disaster, serious injury, etc.)

Sadly, PTSD symptoms can be a lifelong ordeal for those afflicted with the condition due to the poor outcomes of traditional PTSD treatment. According to a 2016 study published in the Neuropsychopharmacology journal, symptoms of PTSD persist in up to 50% of patients who have undergone traditional treatment.

However, the future of PTSD treatment is bright. Ketamine for PTSD has gained traction in medical research circles and, in some instances, resulted in tentative mainstream adoption due to its efficacy. With an ever-growing mountain of evidence supporting the credentials of ketamine for PTSD treatment, conservative circles are finding it harder to ignore and dismiss.

Let’s explore PTSD in-depth — its causes, symptoms, and what makes it treatment resistant — as well as the improved outcomes of ketamine treatment.

What Is Post-Traumatic Stress Disorder or PTSD?

Per the American Psychiatric Association (APA), post-traumatic stress disorder is a psychiatric condition that affects individuals exposed to a traumatic event such as war, assault, natural disasters, serious injury, or accidents.

A combination of a truly awful set of symptoms and poor treatment outcomes makes ketamine for PTSD a no-brainer for those afflicted with this condition.

How Do Other Treatments Fare Against PTSD?

Traditional PTSD treatments range from pharmacological interventions to therapeutic-based treatments. However, the results of these treatments in easing the symptoms of PTSD are not stellar.

The U.S. Department of Veterans Affairs notes that only two drugs are currently approved by the U.S. Food and Drug Administration (FDA) for PTSD treatment: sertraline (Zoloft) and paroxetine (Paxil). Both are selective serotonin reuptake inhibitors (SSRIs), a popular class of antidepressants. However, some studies show that a relapse of symptoms occurs once a PTSD patient stops taking these drugs.

Taking SSRIs and other antidepressants over a prolonged period can adversely affect one’s health. Research suggests that this medication can raise an individual’s risk of suffering a stroke and heart attack.

Trauma-focused cognitive behavioral therapy (TF-CBT), one of the leading traditional PTSD treatment options, is hindered by high dropout rates. Sleep problems often persist despite this treatment, and many patients do not experience a complete remission of symptoms.

It is no surprise, then, that ketamine for PTSD is especially appealing to patients with chronic PTSD or treatment-resistant symptoms.

How Does Ketamine Alleviate PTSD Symptoms?

While ketamine has shown extraordinary results in treating PTSD symptoms, the exact mechanisms of how it works are still the subject of intense study. Current research shows that ketamine modulates the neurotransmitter glutamate, thereby potentially reducing conditioned fear.

Individuals who have undergone treatment via ketamine for PTSD describe the drug’s ability to allow them to relive the experience in a safer and more controlled way. This approach allows them to take back their power and attenuate their fears. 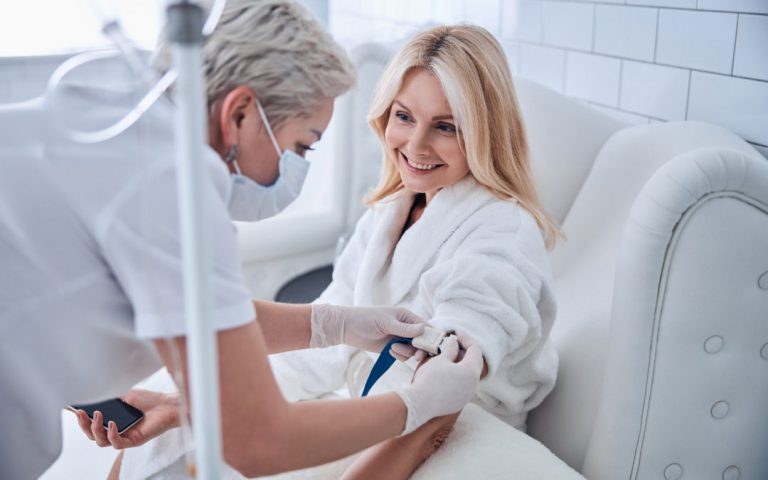 A trial where ketamine treatment for PTSD was measured against the success of midazolam, a benzodiazepine used for sedation and the treatment of severe anxiety, was stopped early due to an enormous gap in efficacy between the two drugs (in favor of ketamine).

How Safe Is Ketamine Infusion Therapy?

Ketamine is a safe and generally well-tolerated PTSD treatment. Many of the referenced studies note that the participants who received IV ketamine infusions for PTSD experienced little to no adverse reactions.

However, ketamine infusion therapy must be administered in a safe and professional setting (especially for PTSD patients) by a licensed physician. This approach ensures that any side effects of ketamine treatment that may arise during the infusion can be mitigated effectively.

Are You Ready To Start Your Ketamine Infusion Experience?

With mental health issues increasingly becoming the number one concern modern health advocates seek to solve, ketamine may just be that solution. But you don’t have to take just our word for it. Do your research, then come into Virginia’s premier ketamine infusion clinic in Leesburg.

Send us a message through our contact us page or call us at (571) 371-029 to connect with our friendly staff. Learn more about ketamine infusion therapies and their benefits for your health. If you’re ready for a one-on-one consultation, our office at 19490 Sandridge Way Suite 240, Lansdowne, Virginia 20176, proudly serves Loudoun County and the Ashburn area. Come in and let our experts create the best treatment plan for you. We also invite you to keep up with our blog and social media to get answers to many of the frequently asked questions about ketamine infusion therapies.