It is estimated that every year, 16 million American adults are debilitated by major depression. It is a dangerous, growing trend in our society. For example, depression-related suicides increased by 30% between 1999 and 2016.

There are several options for treating depression, including talk therapy and medications. But for some, nothing seems to work; they are considered treatment-resistant.

For these people, however, there is another option for treatment. Ketamine infusion therapy is a substance that is usually delivered intravenously and provides rapid relief. Let’s take a look at what ketamine is, how it works, and how to prepare for treatment.

Originally, ketamine was developed in the 1960s as a drug used for anesthesia. It was widely used on Vietnam War soldiers. With ketamine, patients were less reliant on addictive pain drugs after surgery. In low doses, it acted as a pain reliever.

While using ketamine as an anesthetic, some providers discovered that symptoms of depression, anxiety, and pain significantly improved for some of their patients. So researchers began looking into the possibilities of using ketamine to treat these conditions and developed ketamine infusion therapy. This is currently an ‘off-label’ use of the drug, which is still officially an FDA-approved anesthetic. However, three years ago, the FDA did approve one product, Spravato (esketamine), for treatment-resistant depression.

What Is Ketamine Therapy?

Ketamine infusion therapy injects ketamine into the patient’s body, usually via an IV line. It is carefully administered by doctors using specific, safe doses. The therapy proves to be highly effective when other treatment options, such as antidepressant medications, have failed and the patient is identified as treatment-resistant!

Ketamine therapy works faster than medication, which can take weeks or longer to produce results. This form of therapy yields successful results after just the first infusion in as many as 70% of patients. Further, one study showed that 85% of patients reported that their depressive symptoms were reduced by 50% or more!

There is also great hope that ketamine treatment will be a strong deterrent for suicide attempts. One study reported that for 88% of patients, suicidal thoughts disappeared within 90 minutes of receiving ketamine infusions!

Ketamine therapy is also emerging as an effective treatment for chronic pain disorders and several mental health problems, such as PTSD.

Unlike medications that increase the level of serotonin in the brain, ketamine repairs brain damage springing from an accumulation of proteins created by the long-term presence of stress hormones. Ketamine decreases the signals that prompt inflammation and promote mental disorders. It also facilitates the production of glutamate, which helps the brain form new connections and repair damaged connections. The brain can then more easily generate and focus on positive thoughts!

Patients begin to experience the positive outcomes immediately, which tend to last up to several weeks. An anesthesiologist carefully monitors the treatment to ensure safety. 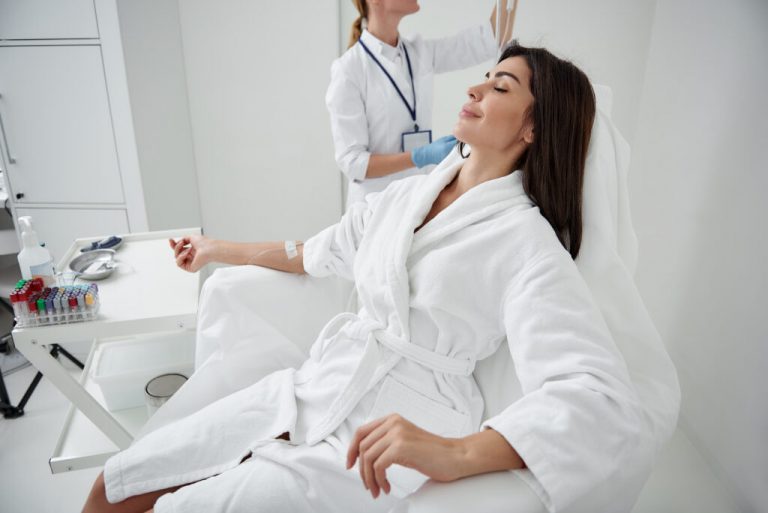 An IV seems to be the most effective form of ketamine infusion therapy. But there are other forms of treatment available as well, such as:

How To Prepare for Ketamine Infusions

Begin your preparation by seeking a consultation with a provider. To find one, try the American Society of Ketamine Physicians, Psychotherapists & Practitioners. Then, with an appointment made, it’s time to prepare yourself for the ketamine infusion.

Give Both Your Body and Mind Time To Rest

You don’t want to arrive for your appointment tired and stressed. To get the most out of your treatments, do what you can to achieve a relaxed state. Make sure there’s no alcohol in your system, and stay away from stressful situations and negative messages, such as what you might see on the TV news.

Ketamine produces a mind-altering experience, so it’s essential to go into it with a positive attitude. Set and have in mind clear goals for your treatments — what do you want to get out of it? Reflect on your experience and consider how you want to change as you go through treatments.

Each treatment for depression can take up to 90 minutes, during which you will be in a sedated state. Wear loose clothing to stay comfortable, and make sure your sleeves won’t get in the way of the IV line.

Arrange for Someone To Take You Home

After treatment, you will not have the clarity of mind to drive yourself home. Have someone there with you to get you home safely.

Refrain From Eating or Drinking

Will Ketamine Infusions Affect My Medications?

Keep taking your medication if your doctor tells you to do so. However, after several treatments, you might not need as much medication, a sign that the ketamine works. Again, this is something to discuss with your doctor.

What Should I Expect During My Ketamine Treatment?

The beginning of your first appointment, about 15 to 20 minutes, will involve an examination and questions to ensure you’re in good condition for treatment and having the IV placed in your arm.

Depending on your specific condition, expect to be there from an hour for depression to two or more hours for other ailments and to have a schedule of treatments tailored to your condition. For example, you may have two treatments per week to start (for depression) or three four-hour treatments in the first week (for pain).

While ketamine infusion therapy is highly effective, it is not guaranteed to work for everyone. You will know within a few sessions whether you should continue or try a different therapeutic route.

Throughout each treatment, your provider will monitor your vital signs to ensure your safety and to catch any side effects of ketamine as soon as possible.

You will probably experience an altered state of mind and a feeling of being out of your body. You will be awake and able to communicate in simple terms. Don’t expect to have a complex conversation with anyone. It is possible to feel nauseous from dizziness.

Try your best to remember what you experience during treatment, as it reflects your subconscious mind. Ketamine infusion therapy can create new neural pathways in the brain, so give yourself time to process your experience. Consider your gut feelings, think about what habits you want to change, express your thoughts about it, develop new routines, or meditate.

Most importantly, be patient with yourself!

Are You Ready To Start Your Ketamine Infusion Experience?

With mental health issues increasingly becoming the number one concern modern health advocates seek to solve, ketamine may just be that solution. But you don’t have to take just our word for it. Do your research, then come into Virginia’s premier ketamine infusion clinic in Leesburg.

Send us a message through our contact us page or call us at (571) 371-0290 to connect with our friendly staff. Learn more about ketamine infusion therapies and their benefits for your health. If you’re ready for a one-on-one consultation, our office at 19490 Sandridge Way Suite 240, Lansdowne, Virginia 20176, proudly serves Loudoun County and the Ashburn area. Come in and let our experts create the best treatment plan for you. We also invite you to keep up with our blog and social media to get answers to many of the frequently asked questions about ketamine infusion therapies!

Ketamine: What Chronic Pain Does It Treat?

What Are NAD and NAD+ Vitamin Infusions?